The 2021 river otter season harvest limit of 20 was reached on November 10 at 6 p.m. central time and the season is now closed.

Any trapped river otter is considered incidental take and must be turned in to GFP. It is illegal to harvest river otters by hunting now that the harvest limit has been reached.

The river otter is a mostly aquatic furbearer thought to have occupied one of the largest geographic areas among North America’s mammals at time of European Settlement.  However, the river otter suffered population declines resulting in the loss of nearly 75% of their range by 1988.  Reintroduction efforts throughout North America have led to a successful rebound of this once widely distributed mammal.  River otters occur in several streams, rivers and marshes within eastern South Dakota.

River otters are secretive in their behavior but are active year-round during the evening and from the hours of dawn to midmorning.  They range in size from 34 to 54 inches in length and their weights can range from 7.4 to 34 lbs.  They are characterized by a cylindrical-shaped body with short legs; a rudder-like tail; short, dense fur; and feet that are completely webbed and adapted for an aquatic lifestyle.

River otter harvest limit has been met and the season is closed.

Once this harvest is reported, the trapper/hunter will be directed to call a GFP Wildlife office to set up a time to check in the river otter carcass and receive their CITES tag for the detached river otter pelt.

For an update on the current river otter harvest please view the following link:

The river otter trapping/hunting season is only open to residents of South Dakota.

Sunrise November 1 to Sunset December 31, 2021 or until the harvest limit of 20 river otters has been reached (whichever comes first). 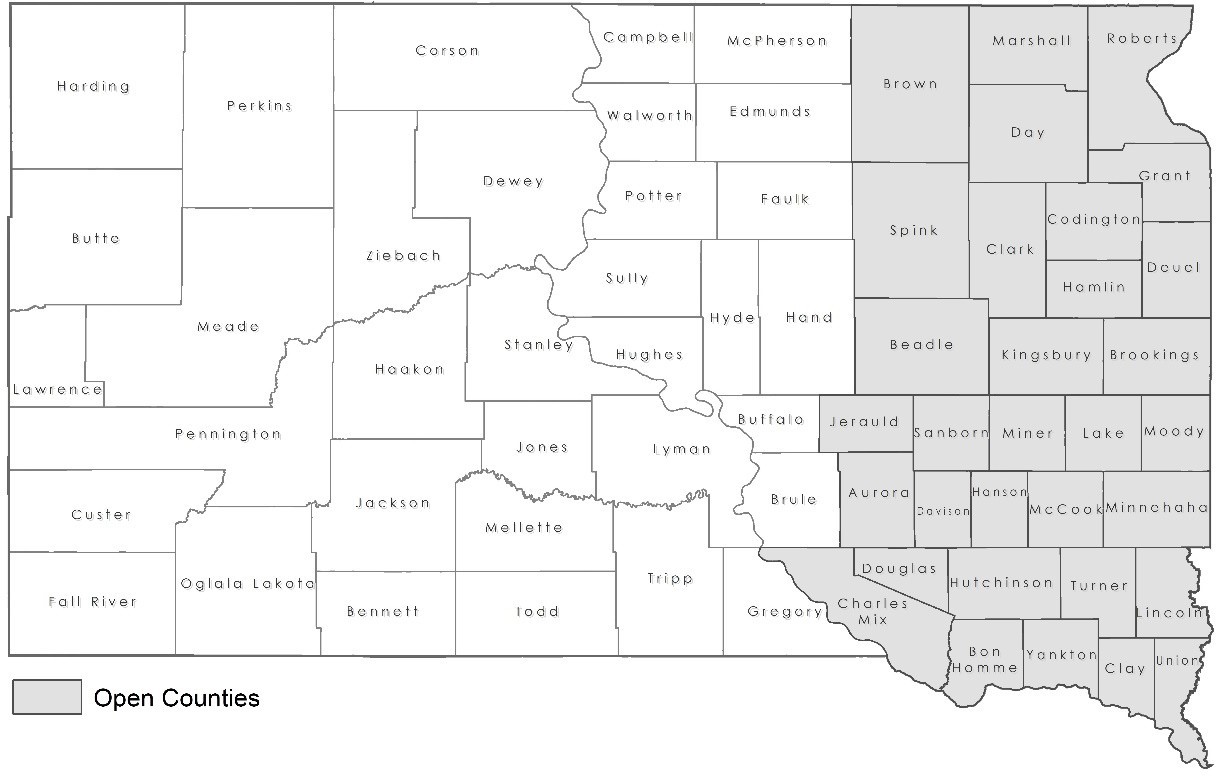 One river otter per trapper/hunter per season.

*During the open season trappers/hunters are required to report any river otter within 24 hours of harvest to GFP. The trapper/hunter is then required to check in the carcass and detached pelt at a GFP office for registration and CITES tagging of the pelt within 5 days of harvest. After the pelt is tagged, it will be returned to the trapper/hunter. GFP staff will collect biological data from the carcass.

Reports of river otters are used by South Dakota Department of Game, Fish and Parks (GFP) for the management and monitoring of the species. These reports are valuable information used to modify trapping/hunting seasons, and determine river otter distribution and expansion within SD. Please report any river otter sighting or river otter sign (i.e. tracks or scat) to GFP.

If you catch an otter in a trap or snare outside of the designated trapping/hunting season, release it alive without injuring yourself or the otter. If the animal is severely injured contact a GFP representative as soon as possible. Report these incidentally caught live otters via phone, email, or mail. Knowledge of the location of incidentally caught otter helps to monitor their distribution in the state. If the animal is dead, leave it undisturbed and contact a GFP representative within 12 hours. Carcasses provide important information, such as reproductive status, age, and health. You can learn more about ways you can avoid river otters when trapping in our informational video.

If you observe a live river otter or river otter sign, record this basic information: date, location (Township, Range, Section or GIS coordinates), general habitat, behavior (if the animal is witnessed) and a description of the animal. The location information is used to help monitor otter distribution in the state. Submit your report via phone, email, or mail. Please include your contact information.