In the 1900s hunting seasons established by the South Dakota Department of Game, Fish and Parks Commission allowed deer populations to recover from historic lows. Deer hunting seasons have occurred regularly since the 1950s, with deer hunters harvesting approximately 95,000 deer during the recent record year of 2010.

White-tailed deer and mule deer are the most highly sought after big game species in South Dakota and throughout North America. Hunting remains the number one tool for managing deer populations across South Dakota and harvest strategies are intended to ensure the well-being of the species and its habitat while maintaining populations at levels compatible with human activity and land use.

Chronic Wasting Disease
Chronic Wasting Disease (CWD) is a fatal brain disease of deer, elk and moose.  In South Dakota, CWD has been detected in Lawrence, Pennington, Custer and Fall River Counties, Custer State Park and Wind Cave National Park.  More information about CWD can be found here and a map of approved big game carcass disposal sites is also available at the bottom of the page under "Related Maps".
Nonresident Archery Deer Changes
At their June 2019 meeting in Pierre, the South Dakota Game, Fish and Parks (GFP) Commission approved 7-1 an amended proposal regarding nonresident archery hunting and access permits. This proposal included three major changes to the nonresident archery season and Unit 35L. Change #1: Archery hunting for nonresident hunters will begin on October 1 for public lands and private land leased by the department. These private lands include Walk-In Area (WIA), Conservation Reserve Enhancement Program (CREP), Controlled Hunting Access Program (CHAP) and Cooperative Hunting Access Areas. Nonresident archery hunters will still be able to hunt on private lands starting September 1. Change #2: An application deadline of April 1, was established for nonresident hunters, where any application received after that date the license will only be valid on private land, not including land leased by the department for hunting such as WIA, CREP and CHAP areas. The 2019 deadline was August 1, which only applied for the 2019 deer hunting season; beginning in 2020 and beyond the deadline will be April 1. This deadline does not preclude a nonresident from obtaining a license, but the license would only be valid for private land. A nonresident hunter checked hunting on public land with this license could be cited for a violation. Change #3: Access permits on Unit 35L will be limited to a total of 625 access permits. Those access permits would be distributed as follows: 500 resident access permits and 125 nonresident access permits. These access permits would be free and distributed through a lottery drawing. A full Frequently Asked Questions document can be found here. Application requirements for the 2019 Limited Issue Archery Deer Access Permits can be found here.
Changes to the Deer Drawing Structure
On March 1, the South Dakota Game, Fish and Parks (GFP) Commission unanimously approved a new deer license allocation proposal that allows a resident hunter to apply for two of the six deer seasons in the first draw. These seasons include: East River/Special Buck, West River/Special Buck, Black Hills, Muzzleloader, Refuge and Custer State Park. Special Buck license holders are limited to one additional application in the first draw as long as that application was not valid for the same season as their Special Buck license. Nonresident hunters are still eligible for eight percent of the allocation for West River, Black Hills and Refuge hunting seasons during the first drawing. Other details include: In addition, preference points for the combined deer drawings would be free to youth age 15 or younger during the calendar year when the preference point is acquired. A first-time applicant for a combined deer drawing that is or was age 15 or younger in the calendar year of the drawing would receive a bonus preference point for that drawing. The Commission intends to conduct a comprehensive review of these changes in three years.
2018 vs 2019 Deer Draw Statistics
For the past two years, GFP and the GFP Commission have been working on alternative drawing structures with the end goal of getting more people in the field each year. Hundreds of public comments were received throughout this process and, at times, became very contentious. The commission made several proposal considerations and adjustments based on public input, and a new structure was ultimately adopted. In the spring of 2019 the GFP Commission finalized rule that allows applicants to apply for two of the six firearm deer seasons in the first draw – East River Deer/Special Buck, West River Deer/Special Buck, Refuge Deer, Muzzleloader Deer, Refuge Deer and Custer State Park Deer. Before this change, applicants would apply for all deer seasons at once. Now, applicants who are successful for drawing two licenses in the first draw cannot apply for additional licenses until the third draw, and only in those seasons they do not already hold a license. Another change the commission passed was to allow applicants to use preference for their second choice in the first draw, and also for their first and second choices in the second and third draws. One of the conditions the commission directed at the department was the necessity for a thorough review to occur after the third year of implementation to assure the structure was accomplishing the desired goals and to bring forward any necessary changes at that time. We are already seeing the results of the first draw: 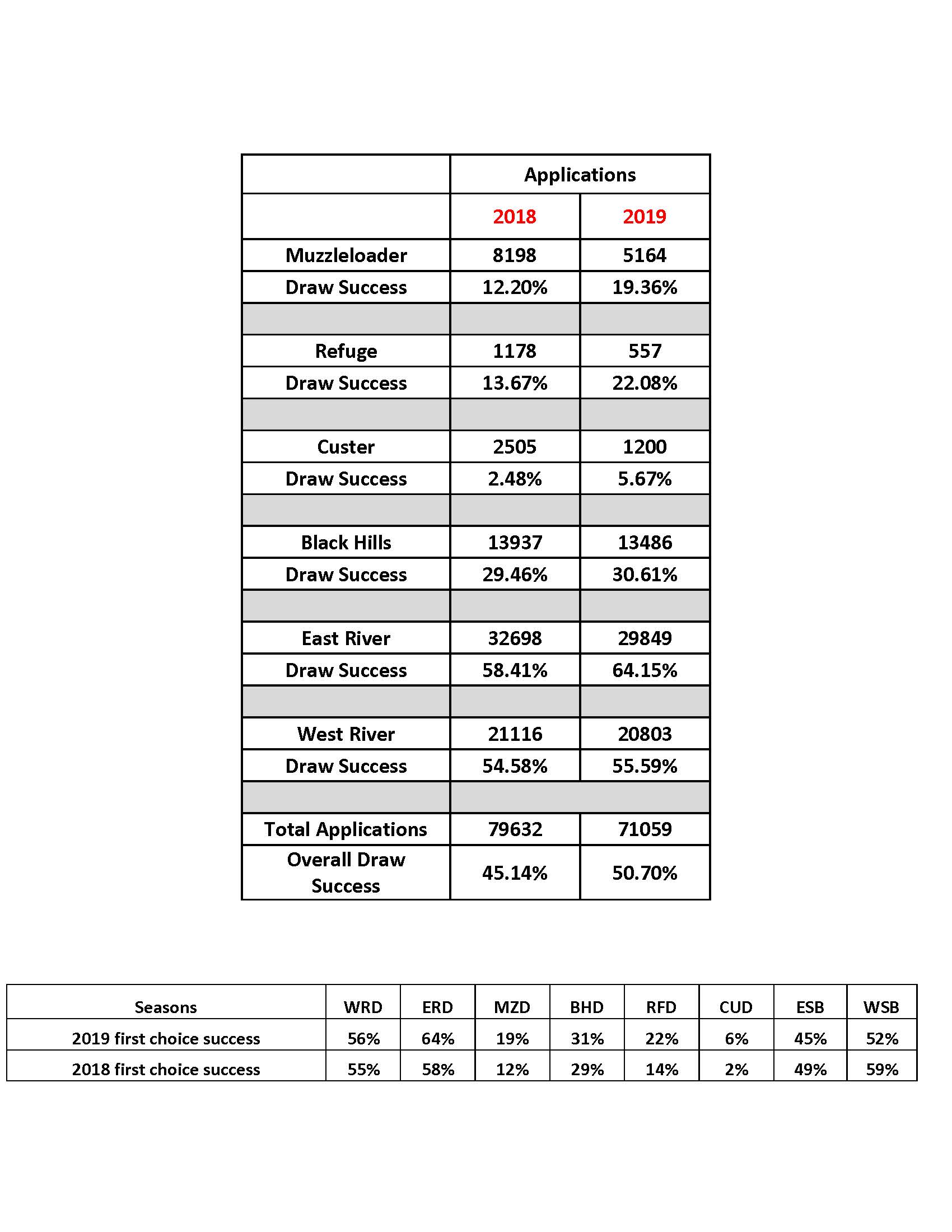 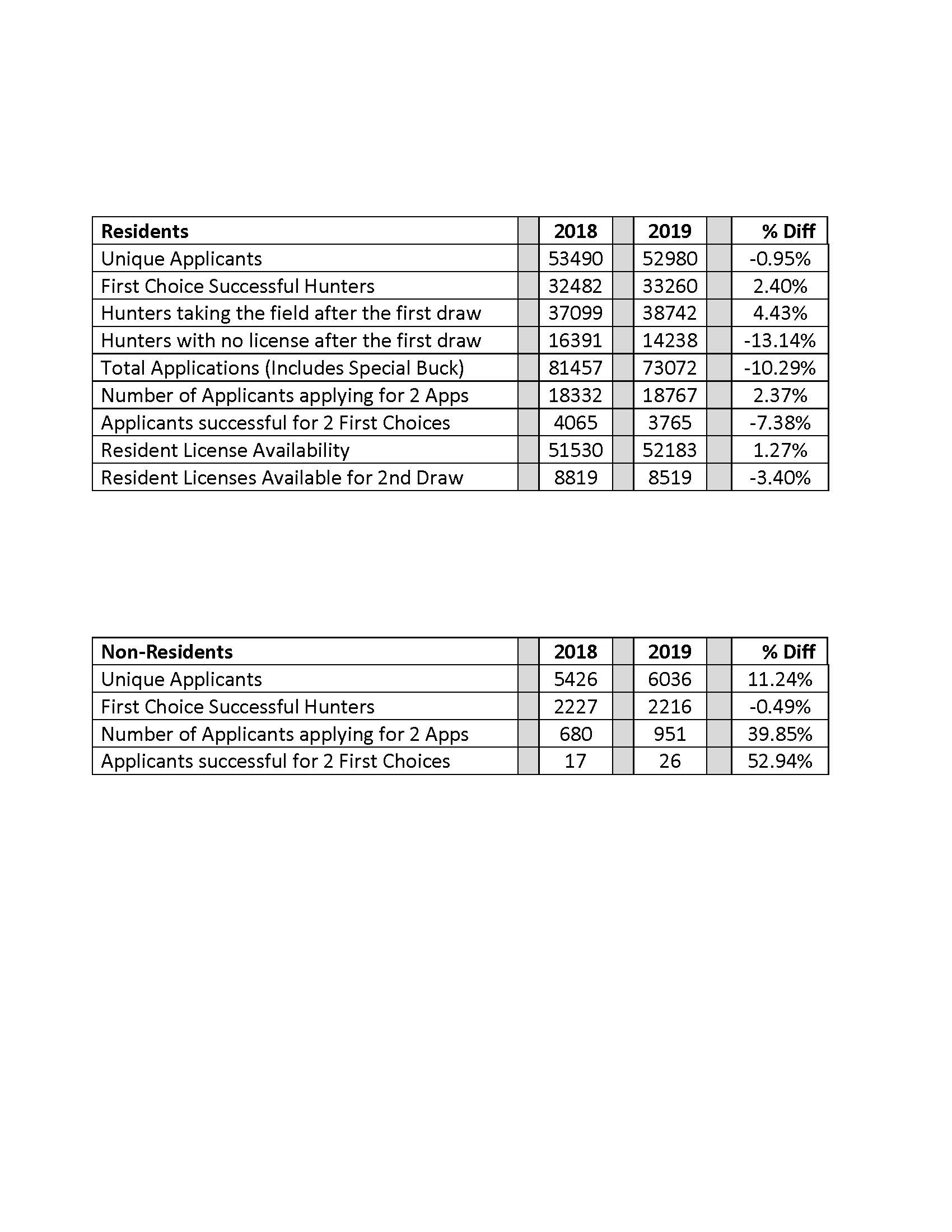