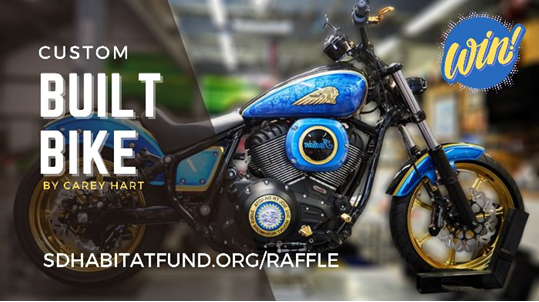 “Having partners like Carey and Indian Motorcycles stepping up to help the Second Century Habitat Fund raise money for habitat across South Dakota shows how much they value conservation. We couldn’t be happier to partner with such great people who support our mission,“ stated Sal Roseland the SCHF development director.

For a chance to win this custom-built bike all you have to do is visit sdhabitatfund.org/raffle to enter. Each entry is $100 and the drawing will take place on August 8, 2022, on the largest stage in Sturgis located at the Buffalo Chip during that evening's concert.

Proceeds raised from this raffle support habitat programs across South Dakota, promoting quality habitat for wildlife to thrive while ensuring another century of the nation's best pheasant hunting.

“His passion and background as an avid sportsmen have shaped his conservation values over the years leading him up to this opportunity, and we are excited to have him on board,” said Jim Scull, President of the Board of Directors.

“I’m honored for this opportunity to lead the Second Century Habitat Fund into the new year where there are so many opportunities in front of us,” said Brian Bashore. “The landscape is changing while South Dakota’s economy is thriving, and we need to ensure a good balance of both to secure the second century of South Dakota’s heritage of pheasant hunting is as great as the first. And we achieve that through providing quality habitat for all the wildlife to thrive.”

Supporting Governor Noem's Second Century Initiative, the Second Century Habitat Fund is a nonprofit 501 c3 corporation that works to educate landowners on the importance of grassland to improve pheasant habitat in South Dakota. The Fund is governed by a Board of Directors representing landowners, business owners, pheasant preserve operators, and community leaders across South Dakota.

To be advocates of habitat stewardship, collaborate with community partners, and be conservation leaders to benefit all of South Dakota.

To restore and retain pheasant habitat development while providing awareness to the importance of sustaining South Dakota’s strong outdoor heritage of pheasant hunting for future generations.