March 13, 2020
PIERRE, S.D. – The South Dakota Game, Fish and Parks (GFP) Commission proposed changes to the number of elk licenses available in the 2020 and 2021 hunting seasons. The changes are based on the results of the Black Hills aerial survey to maximize hunter opportunity and meet population objectives identified in the elk management plan.
The Black Hills firearm season would have a total of 430 “any elk” and 715 “antlerless elk” licenses and 142 “any elk” and 85 “antlerless elk” for the Black Hills archery season for the 2020 and 2021 seasons.
The commission retained the number of Custer State Park “any elk” licenses at 8, and retained the number of Custer State Park Early Archery “any elk” licenses at 3. There will be no Custer State Park “antlerless” elk licenses available for 2020 or 2021.
Along with the Custer State Park season changes, the commission removed the mandatory chronic wasting disease (CWD) sample submission of deer or elk harvested in the park. Hunters are still able to voluntarily submit their animals for testing.
The commission also allotted 78 “any elk” and 178 “antlerless elk” licenses for the Prairie Elk hunting season. In addition, the commission established a new prairie elk hunting unit for much of western South Dakota that will include those portions of the state west of the Missouri River not associated with another prairie elk unit, excluding Corson, Dewey, Oglala Lakota, Todd and Ziebach counties, as well as the Lower Brule Indian Reservation with season dates of Sept. 1 – Dec. 31.
Other modifications to the Prairie Elk hunting season include:
• Modified those portions of Unit 9 in Butte and Lawrence counties to include that area within a line beginning at the intersection of U.S. Highways 85 and 212, then east on Highway 212 to Whitewood Valley Road, then south on Whitewood Valley Road to Interstate 90, then west on Interstate 90 to U.S. Highway 85, then north on U.S. Highway 85 to point of origin. That portion of Unit 9 in Meade County would remain unchanged.
• Modified Unit 15A to include those portions of Butte and Lawrence counties within a line beginning at the junction of the South Dakota-Wyoming border, east on Sourdough Road to U.S. Highway 85, then south on U.S. Highway 85 to Interstate 90, then west on Interstate 90 to the South Dakota-Wyoming border, then north to the point of origin.
• Modified Unit 27A to include all of Fall River County not included in BHE-H3.
• Eliminated Unit 30A (portions of Gregory County) and include this geographic area into the West River prairie unit.
• Established two additional antlerless elk seasons for Unit 11 with season dates of November 1 – December 31 and January 1 – February 28.
• Established an antlerless elk season for Unit 15 with season dates of December 1 – January 31.
• Modified Unit 35 from all of Harding County by splitting into two units; one west and one east of US Highway 85. 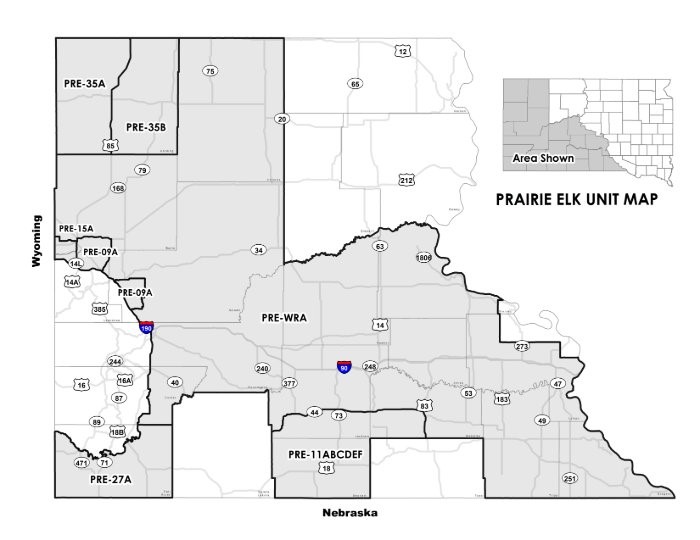 To comment in person, the public hearing will be held April 2 at 2 p.m. CDT at Good Earth State Park located at 26924 480th Avenue in Sioux Falls. Oral testimony can also be provided remotely at this time, via conference call at the GFP Rapid City Regional Office (Outdoor Campus West) 4130 Adventure Trail, Rapid City, SD, at the GFP Watertown Regional Office 400 West Kemp, Watertown, SD, or at the GFP Main Office, Foss Building, 523 E. Capitol Ave., Pierre, SD.
Individuals can comment online at gfp.sd.gov/forms/positions or mail comments to 523 E. Capitol Ave., Pierre, SD 57501. To be included in the public record and to be considered by the commission, comments must include a full name and city of residence and meet the submission deadline of 72 hours before the public hearing (not including the day of the public hearing).
View All News